Made it out to Austria 10 days pre-race and stayed at the race hotel (The Seapark). Had not had the best run into the event as could not get rid of a recurring chest infection in the month running up to the event and also had some type of viral infection in the back of my throat. Despite that after a few days in Austria and being into the taper the chest infection was on the mend but the wife still had a cough so was just hoping it would go away and stay away.

I had worked hard prior to getting to Austria and felt I was in my best shape I had been in. I was down to 70kg (7-8% bf) on the nose and likely just under come race day (I tend to be strict on the diet race week and this shifts any extra lard). What I should say is that my average training is 10 hours a week. The reason for 10 hours is simply work and family commitments. My feeling is that you can still make some fantastic race performances, but you need to be consistent. So what maybe possible in say 18months of 15-20 hours training a week you can achieve doing 10 Hours but maybe over 3 years.

I never waste a workout and every session has a purpose and specific training zones. I get my physiological capacity done by an experienced professional (www.sportstest.co.uk) and this helps make sure I train based on science and not guess work. Although I know most of the local triathlon team members 99% of my training is done alone to ensure I get maximum benefit from each and every session. However, with that said if you have more time, quality training and you can recover from the increased training load (I am in 40s now so this is a consideration – train smart not just harder) then progression in Ironman can for sure can be faster.

OK Back to Ironman Austria…

The Seapark hotel was perfect in its position and the swim exit was directly at the side and to the rear of the hotel. If any one visits here its almost like a mini duck pond and that’s where you exit on race day then run over the road to bikes in T1. During the stay one evening we were at our table for tea and the Women’s World Ironman champion Mirinda Carfrae (www.mirindacarfrae.com) was at a table opposite. Knowing from past experience with working with athletes I know that they can spend a lot of time alone pre-event so we invited her to join us and she did. She was a real lady and she was lucky I managed not to quiz her for the hour about her nutrition too much as I am sure she gets sick of talking shop. It was a highlight of the holiday for sure and it was no surprise she went on to destroy the competition at Austria.

SWIM: The swim course finishes along the canal that runs behind the hotel but the start is only about 5-10 mins walk away. It’s a beautiful lake and I have to say we had a fantastic holiday, great for kids and families and more important for this blog training and pre for the big day.

I had swum portions of the swim course in the week leading up to the race following advice that the entrance to the canal was difficult to see in the morning sun. So felt come race day I would know what markers to look for. In the end come race briefing we where told that not only would it be a wetsuit legal (some concerns over this in the preceding days due to very high water temps) but also that this year there would be additional markers to help sight the entrance to the canal. Thanks – so glad I wasted time learning to site the canal ha. 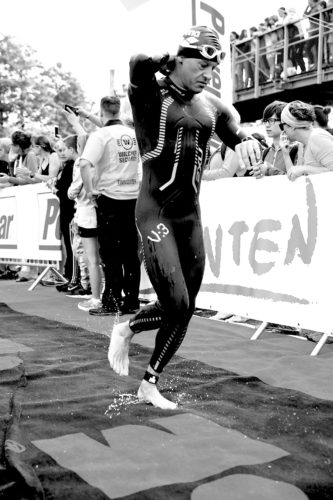 Race morning came and it was the most prepared I have ever been and the least nervous. I had a good idea of the course having biked 70k of it, I had also completed parts of the run and swam much of the swim course. The swim is a rolling start which is a must have now for all Ironman races as the number totalling 3000 athletes just make the events plain dangerous otherwise. The whole issue of race numbers and drafting is a whole other issue that Ironman have to address. My own view is we need less than 2000 per race but I guess cash speaks over the needs of the participant for a fare and comfortable race.

The swim was ok. I felt at ease and didn’t work that hard. I came out of the water in 63 mins, which was a little disappointing as I though I would break 60mins given my pool times. I just thought get through the transition and out on the bike to pick up some time. There are a number of cheeky climbs on the course including the “Rupertiberg” (65km in) and the “Faaker See” (35km in) and if you don’t pace well over these you will feel them on the second lap.

BIKE: So the goal was to stick at around 210w for much of the race with 240-250w on the climbs (See figure 1). There where a few chain gangs out on the course for sure, which as always pisses me off but nothing you can do about them and you have to just think about your own race. I only had to stop once on the course for some special needs, which lost me 2 mins (post race analysis). On the plus side I overcome the shy bladder issues – this might have been helped by the down pour half way into the second lap which included some hailstone. Nice…I had never heard of this but it was not to bad but everyone had to slow down as some of the bends on the course can be super slippy as the roads are like an F1 track. 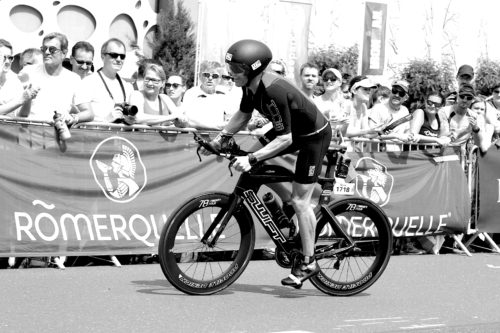 What I will say is the course is by no means flat its undulating throughout but because of the downhill’s and the road surface is like a race track and you make up lost time on the hills due to the roads and descents. I managed a 5Hr 12min bike (5Hr 10min moving time) at 78% of HRmax and 210w. This was my best bike time to date and felt pretty good. Key to making this a fast ride is keeping in a very aero position and this has never been an issue for me, so I am luck in that regard as I know a lot of people suffer to hold an aero position. Reminding yourself throughout to keep tucked and making movements to get your drinks etc as quick as possible helps with this. 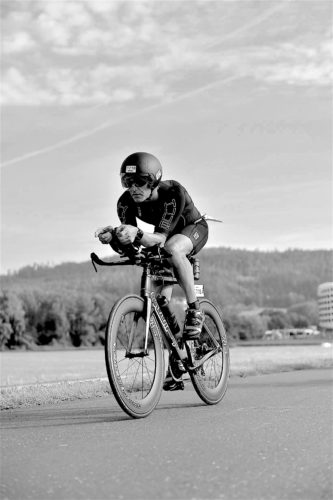 RUN: About 2k in had a quick toilet stop and then was on my way but felt very sluggish and had in my head pre-race that I could make a 9.15 for the Ironman, if I could keep to the bike plan but was already down 15Mins (5 lost on swim and 10 on the bike). So realistically I was probably looking at a 9.30, but I had ‘Ironman brain’ at the time and was just thinking I am not going to make the time I wanted. Note: Ironman brain – long day, tired, low blood glucose a bit dehydrated turns relatively intelligent people into total dumbasses. 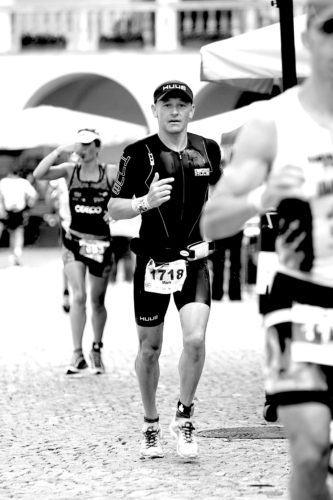 So despite being on for what would have been a record Ironman time for me I was focusing on how tired I felt and how I wont make the time I set out. This negativity is not normally me in a race and I tend to plough on forwards, but this day could not shake it. About 30 mins into the run I spotted my wife and daughter and said I didn’t feel great and was thinking of quitting (you can see these stops on Figure 2).

I never quit races and this was a real shock to my daughter (10Yrs old) who started to cry and was worried about me. So I said I would carry on (you can see my stop at 28-29.30mins), so I set of and although it felt like the slowest run ever I was actually on for a 3hr 30Mins marathon (Ironman Brain = idiot). I made it to 62 mins of the run and again spoke to the wife for another 4 mins and she convinced me to keep going and slipped me a Mars bar to eat to cheer me up (yep I love chocolate). I got just over 19km in and dropped out (see figure). At that point this was purely mental had convinced myself I was totally fatigued and had not reached my goal times.

In looking back this was a stupid decision and I will one-day return to complete Austria. I beat myself up over stopping all night and like any fool I booked myself up for Ironman Barcelona (Oct 2016) the same night. The next day I did not feel great and seeing the finishers with their t-shirts didn’t help. But we finished out the last few days of the holiday, had a great last few days.

I still had a throat infection when I arrived back in the UK so when to the doctors and they did a few blood tests and a throat swab. The results showed I had some immune suppression but also and viral infection and Uvulitis (ye I didn’t know what this was either but the reason I felt like I was choking when I swallowed). Two courses of penicillin and some other lovely drugs and virus was all gone.

So in final review I loved Austria despite the fact I pussied out and didn’t finish at all costs (the Ironman way) and after getting home and seeing the doctor perhaps this was the right thing. However, in my head I felt this was a mental defeat rather than physical but who knows – you tend to push on through no matter what in this sport but I promised myself I would not quite at Ironman Barcelona come October no matter what.