The bike was tough and climbs long, with some  lasting over a 7km and at places a 13% gradient.

Apologies for the delay in posting up this race report but work has been pretty hectic although that has not resulted in any reduction in the training. So back to race…

Switzerland…Always sounds beautiful but I had a shocker getting there. It was an very early flight out of the UK, so had to leave the house at about 3am – so everything packed and had airport parking at the terminal.

However, arrived in plenty of time but on route from the car park to the check-in desk, a few hundred meters I had dropped my wallet. PANICK stations. Its 5am surely no one would have picked it up and kept hold of it especially with only about £10 in there. But sure enough in the minutes of realising and going back to the car pack the wallet was gone and no one had handed one in. As you know the headache is the loss of all your cards.

I needed the wallet to pay for the bike check-in and of course no one was awake at that time to bail me out and I needed to cancel all my cards. That was the start of the day. Next one of the guys I was with was overweight for bike check-in so we had to try to sort his case and time was ticking.

Enough of the drama, we eventually made it to the hotel but could not check-in for a few hours so decided to put our bikes back together. One we checked in we would go for a ride to shake out the legs. Only 20mins out and there was a thunderstorm – it was so heavy we had hide under a garage from the lightening. Was someone trying to tell us something?

Next morning one of the guy’s bike was not right and an issue with the headset would mean no race start unless he could get it fixed. So needed to try and get the race mechanics to fix it. They could not so he was in search of another mechanic and that would mean wandering about in the 30oC sun for a few hours. Then just to add more insult later in the day for bike checking we had didn’t have all the bags we needed so had to do another 40mins round trip on the bikes to collect 2 empty bags from our hotel so we could rack the bikes. What crap race prep, lots of dehydration and stress all what you don’t need pre race day.

By the end of the day we had checked in and the bike was fixed, so we would all be racing the next morning. That left some panic re-hydration and not much time to sit with the feet up.

Race day was going to be hot peaking at >30+ oC, and as an old guy I would be going later in the day, but in our group we had age ranges from 21> up so we still needed to be at the race early. Race morning bike check and warm up all went great so a big relief.

The swim was wave starts and you self selected within your wave for time (I selected sub 30mins). My swim was just OK but again not fantastic at 31Mins. Not sure what’s going on with my open water swim in these early season races as not reflecting the improved pools times. But will keep at it and make the weekly outdoor session a regular thing from now until Kalmar.

Transition is longish but pretty straight forwards but I am typically sluggish on transitions and this one was no different where I was about 1min down from top age-groupers. Once onto the bike it was head down for what was going to be a tough race with climbs and the heat and also lots of early age groupers out on the course to get around.

The bike was tough and the climbs where long with some for sure lasting over a 7km stretch and at places 13% gradient. However, I paced it well and as planned just slightly under a NP of 240w with the aim of a strong low 1.20s half marathon run on the cards. My bike as a 2.33 and the T2 was also fine as usual.

Off the bike felt pretty good then 1-2km at race pace (4min/km) in I got cramping in quads and hamstrings. This is very rare for me as pre-race prep and nutrition is normally on-point; so I can only put this down to all the time spent in the heat in the days leading up to race day. Unfortunately, the situation did not improve as the run progressed so it was a case of managing it by continuing with nutrition and keeping pace just under where the cramps would kick in.

To be honest the run was brutal and ended up running the whole run with severe cramps. I knew if I stopped I would not be able to start again so just kept on at circa 4.25/4.30 pace. The only exceptions was at what is know as the ‘stairway to heaven’ a series of steps in the centre of town you have to climb twice during the run. 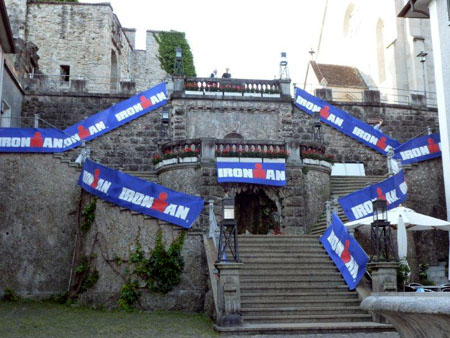 There are maybe 50/60 steps and when you have cramp that’s some painful shit. After the steps you have a slight downhill and that allowed me to force the legs to get going again and just grin and bare the pain. 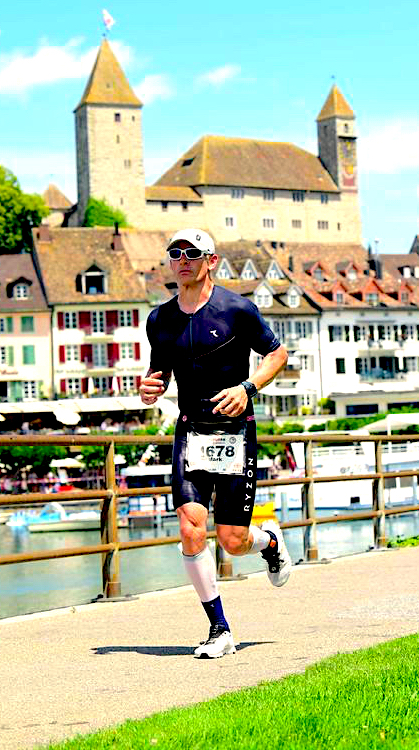 My run was a 1hr 32min, which was about 10mins short of where I should have been and would have given me around top 5 in the age group. But you have what you have on the day and I was proud of myself for pushing through when I could have so easily walked. I learned some good lessons from the race:

My 4.44 was almost 20mins slower than a 70.3 just a few weeks before but I was still pretty happy with the result as I had given my all. The only downside was what had I done to myself regarding recovery time. In the end these 70.3s are only sharpeners for my Ironman races, and there is the choice of how hard to push and how quick you can get back to solid IM sessions.

This was a good few weeks ago now and I am fully back into IM training in the UK heat wave. At the time of writing I have 5-6 weeks before IM Kalmar one of the A races for the year. Although I hate that term as when you toe the line of any race you should be giving your all – I see A/B/C race categorisation more about what sore of form your in at that point in the season than the importance of the race.

I can recommend IM 70.3 Switzerland to anyone it’s a real honest race and tough – you earn you post race goodies for sure and no one get over those climbs easy.

For me it’s back into the final few weeks of long bikes, brick sessions and some final dieting for Kalmar. I am really looking forward to the race and enter it in best shape since getting into this sport.

Whatever, your plans for the season I wish you the best!